5 reasons to choose Paris With its historical monuments, its cultural dynamism and its gastronomy, Paris is a mythical city full of surprises! 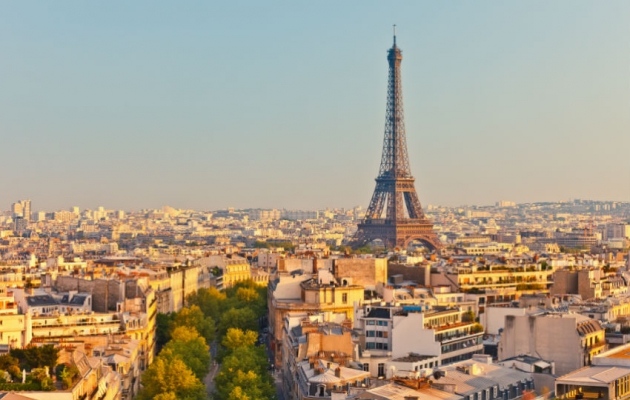 Paris, a legendary city, has inspired artists, photographers and musicians throughout the ages. Victor Hugo described working-class Paris in Les Misérables; Apollinaire immortalized the Mirabeau bridge in his poem and Joe Dassin composed a song titled ‘Les Champs Elysées’. These days, luxury brands like Cartier and Dior draw inspiration from the beauty of Paris for their designs. Paris is a popular setting for French films – just think of Amelie, with its many scenes shot in Montmartre. The city has also featured in international films; it is a particular favourite with American filmmakers. The Da Vinci Code is just one example. Then there’s From Paris with Love, Inception and of course Woody Allen’s Midnight in Paris, with scenes shot in Paris palace hotels like the Ritz and the Meurice, in the Musée Rodin and the Palace of Versailles: a genuine tribute to the French capital.

Situated at the heart of Europe, Paris is easy to get to, with 2 international airports: Paris Charles-de-Gaulle (23 km to the north) and Paris Orly (14 km to the south) connecting the French capital to 557 cities in 132 countries. Aéroports de Paris handles some 14,000 flights per week. Paris is at the hub of an extensive and efficient rail network with connections to major European cities (London, Barcelona, Milan, Vienna, Berlin, Stockholm etc.) on TGV, Thalys, Lyria and Eurostar trains.
The city’s 16 metro and 5 RER commuter rail lines make it easy and quick to get around Paris and its environs. The public transport network also comprises extensive bus service and several tram lines. The capital keeps growing its offer, thanks to major projects such as the construction of the Grand Paris Express – the largest construction site in railway infrastructure in Europe – and the future CDG Express, which will connect Paris – Charles de Gaulle airport to the heart of Paris in 20 minutes. As for private transport, taxis and private hire vehicles are available on a 24-hour basis, and can be called for immediate use, or booked in advance using new smartphone applications.

3. A RICH AND VARIED RANGE OF ACCOMMODATION

Paris stands out from its rivals due to its well-balanced, abundant and eclectic accommodation – from luxury palaces to small local hotels, from big chain hotels to charming design hotels with 121,646 bedrooms and 2,056 hotels in 2019.
Hotel residences, Bed & Breakfasts, youth hostels and furnished apartment rentals complete the offer.
To facilitate the organization of an event, independent or booking centres belonging to chain hotels, as well as several incoming agencies provide a service for bookings, the negotiation of quotas and managing of guest rooms.
Every year, many hotels open their doors, and this trend is accelerating in order to host the 2024 Olympic Games, with 36 hotel openings planned between 2020 and 2024 and nearly 6,000 additional rooms.

Each year, around 400 fairs and trade shows are held in Paris, drawing nearly 10 million visitors and 100,000 exhibitors. Paris tops the list of congress destinations; the International Congress and Convention Association (ICCA), a point of reference for the sector, recently declared Paris ‘the world’s leading city for hosting international congresses’. In 2019, Paris welcomed 922,900 congress participants and this activity generated €1.48 billion. With 237 international congresses taken into account by the association (1,084 congresses in total), Paris is ahead of Lisbon and Berlin. The ranking emphasizes the attractiveness of Paris and its know-how when it comes to hosting major events.

Paris has a plethora of venues for meetings and events with 17 congress and exhibition centres, a hundred-odd meeting rooms and a thousand classic, modern and unusual venues capable of accommodating 10 to 10,000 people, Paris is undoubtedly the place to meet! A host of original places are also available for private hire to organize a memorable event: museums, boats, theatres, mansions, parks, gardens, department stores etc.