The Return of Fukushima Festivals with Miki Travel 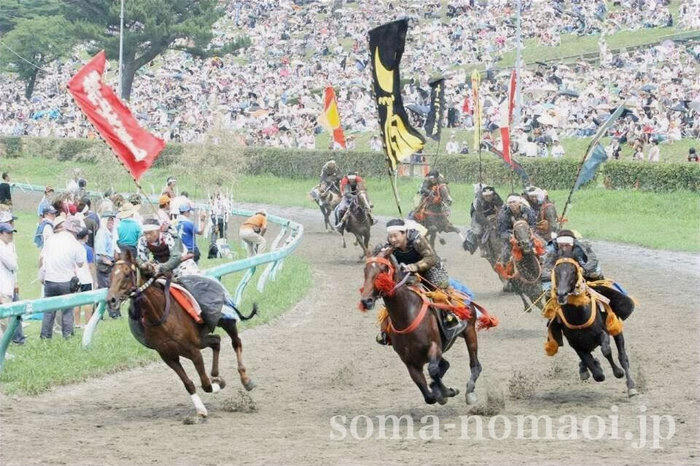 Fukushima festivals are back after 3 years!

The Soma Nomaoi is a traditional event in the coastal region of Fukushima Prefecture and a nationally designated Important Intangible Folk Cultural Asset. It was held on the 23rd July, the first of Tohoku summer festivals. In the past two years it was drastically downsized due to the COVID19 scourge, but for the first time in three years it was held in its usual form.

Around 350 mounted warriors from the Soma region of Fukushima Prefecture set out on horseback to recreate the heroic history of the event until the 25th of July. The biggest spectacle of the festival, the Armoured Horse Races and the Kamihata Battle, were held for the first time in three years, with the mounted warriors in armour running at full speed. In the Armoured Horse Races, the mounted warriors rode through the streets with their ancestral flags, dashing through the wind and stirring up dust, to the delight of a large crowd. In the battle for the sacred flag, the riders fought to gain possession of the flag that had been shot up in the air by means of fireworks. Soma Nomaoi has a history of more than 1,000 years. In the past two years, the armoured horse races and the battle for the sacred flag had to be cancelled due to the COVID19.

The Iizaka Hachiman Shrine in Iizaka Onsen, one of the three best hot springs in the Oshu area, holds the Hachiman Shrine Festival in early October every year. The climax of the festival is the ‘miyairi’ (entering the shrine), during which floats violently collide with each other. It is known as the Iizaka Fighting Festival because of its intensity and is one of the ‘three major Fighting Festival’ in Japan.

The Iizaka Fighting Festival is a traditional event that has been held for more than 300 years to give thanks for a good harvest and to pray to the gods for a peaceful new year. The clashing of the floats originated as a response of the population to ward off the sad atmosphere that preceded the end of the festival, when the mikoshi (portable altar) was being returned to the shrine. The collision of the floats brings a last spark of liveliness to the festival. After the mikoshi makes its rounds through the town, it enters the shrine grounds at night with six floats, carried by a large number of young people. There, the floats collide violently with each other.

This year’s festival is scheduled for 30 September – 2 October. Due to spread of COVID19, it has been decided that the festival will be held in 2022 with no public allowed. For two years in a row the festival was held on one day only, with no miyairi ceremony. On the 30th of September the annual festival ceremony will take place, including the transfer of the holy relic from the main shrine to the mikoshi, followed by a mikoshi-togyo ceremony on the 1st October. The mikoshi procession and miyairi are scheduled to take place on the 1st of October, but the miyairi procession will be shortened to less than half the length of previous years.

One of the three major lantern festivals in Japan, this is a prefectural designated important intangible folk cultural asset of Nihonmatsu City with a tradition of over 350 years. Held over three days on the first Saturday, Sunday and Monday of October every year, the festival will be held as usual from 1-3 October 2022 for the first time in three years.

On the 21st July, it was announced that the event would be held for the first time in three years. After two consecutive years of cancellations due to the spread of the COVID19, the festival will return with a joint parade of taiko drum stands through the castle town. On the first day of the Yoimatsuri, the highlight of the festival, the lanterns are lit simultaneously by the sacred fire of Nihonmatsu Shrine, and seven taiko drum stands, each over 10 metres high and adorned with countless red lanterns, parade through the town in an emotional atmosphere to the accompaniment of festival music.

The red lanterns swaying in the darkness create an emotional and magical night sky.

Taimatsu Akashi, one of Japan’s three major fire festivals with a continued history of more than 430 years, will be held on the second Saturday of November. To reduce the impact of Covid-19 infections, the festival was held only for those directly involved for two consecutive years since 2020. But for 2022, the city has decided to hold the festival for the general public, since the third dose vaccination rate has reached more than 50% and the number of infected people is decreasing.

The festival originated more than 430 years ago, when Sukagawa Castle was invaded by Tohoku regional ruler Date Masamune, and people gathered with torches in their hands to protect the castle. Since then, the festival has continued to mourn the spirits of the warriors.

Each of the 30 giant torches weighs 3 tonnes and is 10 metres long, and is carried through the streets by 150 young men, who set them alight on Mt Goro. The 30 torches are lit and the mountain surface is covered in bright red flames amidst the sound of heroic torch drums. The torchlight fires that scorch the night sky in late autumn are a spectacle to behold!